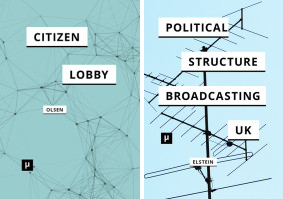 The project Public Service Media 2.0 ends, and a new book series starts. Media, Democracy & Political Process is published by meson press, a spin-off from our sister project, the Hybrid Publishing Lab. The series starts with the launch of two titles. The Open Access PDFs are ready for download, print versions can be ordered now:

Edited by members of the Public Service Media 2.0 Lab, the series explores how the emergence of digital communication affects established modes of policy-making and representation as well as socio-cultural values, identities and networks. The first two titles are a direct outcome of the research in the PSM 2.0 Lab.

Leif Thomas Olsen
The Citizen Lobby. From Capacity to Influence
The political process in modern democracies is largely driven by economic lobbies. In the interest of what Habermas calls their „generalised particularism,“ they threaten to take jobs and tax revenues elsewhere. In contrast, ordinary citizens are perceived by institutional powers as mere policy consumers. The provocative book develops a model that leverages the possibilities for communication and interaction of the Internet in order to enhance the voice of the people. The model would organise the efforts of the electorate in a way that both generates reasoned arguments, which, as Habermas quite correctly pointed out differ from mere opinions, and delivers them to the elected politicians in a manner they can neither refuse nor ignore. This is what the Citizen Lobby intends to do.

Olsen, a former international management consultant turned inequality-researcher, conducted the research for his monograph in the Digital Democracy project.

David Elstein
The Political Structure of UK Broadcasting 1949–1999
Informed by a lifetime in broadcasting both at the BBC and at private media enterprises as director, producer, professor and controversial commentator on media and cultural policy-making, David Elstein in 1999 gave a series of lectures on the post-war development of the British broadcasting system. His account of broadcasting policy spans from the first Committee of Inquiry into Broadcasting 1949-51 chaired by Lord Beveridge to the one in 1985-6 led by Professor Alan Peacock and ends with the BBC’s entry into the digital age. From it a pattern emerges – of committees of the great and good developing recommendations that are then overtaken by the law of unintended consequences.

The lectures which are considered an authoritative source on media policy are here published for the first time. The opportunity to do so arose from the research of Christian Herzog who also wrote the introduction.