Public Service Media (PSM) serve the constitutional freedom of citizens to inform themselves from generally accessible sources, to individually and collectively form their opinions and express and convey them. PSM therefore play a constitutive role in a democratic commonwealth by providing reliable information to citizens, i.e. to the sovereign of democracy. The digital revolution fundamentally changes not only the media but the process of democratic decision making itself. In the networked public sphere transparency and participation gain a novel significance expressed, among others by Freedom of Information laws, Open Data, e-government and public consultations.

The project Digital Democracy researches the history of concepts and techniques for democratic deliberation and decision-making and maps the online tools currently in use. One of the focal points lies on the concept of “Liquid Democracy” spearheaded in Germany by its two main implementations, Liquid Feedback and Adhocracy. The project’s deliverables include a monograph and a documentary film.

The blogposts from the project can be found here. 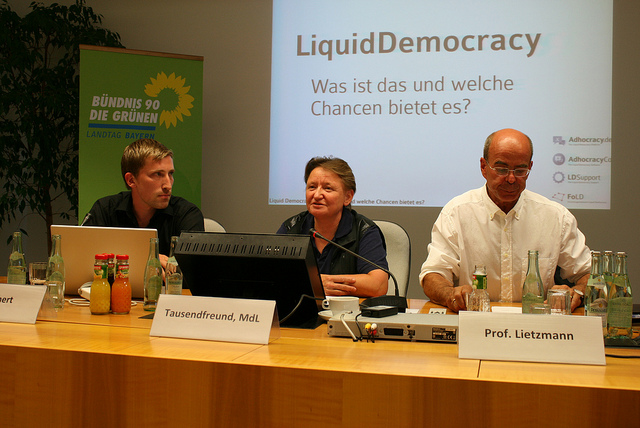 Liquid Democracy: a film about the re-invention of politics

Liquid Democracy is a concept for an audio-visual documentation project about particular experiments in participatory democratic decision-making. In Germany, Italy and other parts of Europe organizations, political parties and even governments are experimenting with an approach called “Liquid Democracy”. What clues does this new approach to participatory web-enabled decision-making hold for the future of democracy? The documentary project combines elements of ethnographic research with elements of documentary filmmaking. The concept for the audiovisual documentation draws upon an ethnographic / constructivist methodology (actor network theory informs the approach).

The focus of the project is to delve into the life worlds of those people who are deeply engaged in developing and using liquid democracy systems, to document how technology and culture are interacting complexly, in the emergence of a new techno-political culture. The intention is to enter into the life worlds of people who are innovating or using emerging digital democracy systems (such as Adhocracy and Liquid Feedback), to explore how ideas inform new practices, and the intersection of human beings, technology and ideology. The research intends to understand both the role of technology in producing possibilities for new political cultures, but as well how culturally informed ideas about politics shape the technological tools that we employ to strategically satisfy values.

The concept draws from the research being done by various members of the CDC research team (literature review and ethnography) to develop one or more compelling narratives that provide coherence and organization to the larger team findings. The guiding questions are: Why are people reinventing democracy? How are they doing it? What does this portend for the futures of democracy? A coherent and aesthetically compelling audio-visual story, that explores democracy in transformation, is the intended outcome.

Some of the communities that the project intends to engage with include:

Within these various examples, the audio-visual documentation project will attempt to delve into specific thematic tensions and controversies in the research area. These key areas of concern include:

While the research project is grounded in the lived experiences of the communities that are innovating and adopting liquid democracy type systems, the film documentation project will also draw conceptually from existing research on liquid democracy at Leuphana University, in particular the work of Nicolás Mendoza and Leif Thomas Olsen.

Mendoza’s research looks at liquid democracy in the context of modernity, in particular the way in which it challenges some of the sacred constructs of modernity such as individualism and privacy. The film documentation will question the extent to which liquid democracy is a pre-figurative innovation indicative of alternative futures.

Olsen’s research looks at liquid democracy in the context of the work of Jürgen Habermas. He challenges technological determinism and argues for the importance of institutional innovation that coincides with renewed citizen engagement. The film documentation project will draw from his critique of technological determinism (e.g. the application of social media to parliamentary processes), examining some of the limitations, indeed even contradictions, that have hitched a ride on the technological promise.

The film documentation project takes the perspective that liquid democracy is not just a grassroots innovation but an institutional innovation. It is subject to the laws and statutes within the existing political economy, while at the same time challenging some of the core precepts of the current era with respect to democratic arrangements. What are the legal dynamics that liquid democracy must navigate? How does it resolve the challenges posed by the existing legal framework? As power configurations are written into law, the film asks to what extent liquid democracy challenges existing power relationships, and how these relationships and configurations of power might change through innovations such as liquid democracy?

The film documentation project takes the perspective that democracy has a long history of innovation that stretches back more than 3000 years. Through this time a variety of political technologies as well as political cultures have been born and have died. While liquid democracy may be only a small footnote in this story, the project aims to explore its significance in the broader context of democratic innovations. Liquid democracy at once draws from historical precedents (direct democracy), present-day capabilities (online technologies), emerging expectations for deepened democratic engagement, and the need to address and adapt to a myriad of social problems and challenges (e.g. to what extent does liquid democracy help address social complexity and generate response ability for its users).

These and similar questions will be put to interviewees, and developed into a filmic narrative which, it is hoped, will provide the bind or glue to tell a coherent and compelling story to audiences who are interested in this particular democratic innovation, the promise it holds, its complexities and limitations.

The use of the Liquid Feedback software as a decision-making tool within the German Pirate Party is not an isolated event, but one inscribed in the long history of practices, methods and technologies for decision-making. These practices, methods and technologies are a fundamental part of all human societies, in a history that exceeds the secret ballot, and in general ‘democracy’ as understood in the West.

Voting technologies are meant to make explicit and intelligible the political will of the members of the society that uses them. Whether hands, ballots or computers are used, collective decision-making practices are technological artefact-procedure assemblages in which one thing (individual political desires) is encoded to be decoded into another (collective decisions). They are processes of mediation par excellence.

The specificity of Liquid Feedback as a digital platform carries dramatic implications both in terms of its ability to perceive and manage information, and in terms of privacy, security and surveillance. To what extent and how does the Liquid Feedback platform capture and change information about the political will of its users in the process of mediating it? Is the voting technology socially located in a position where it can meaningfully change the state of affairs of society? Is it configured in such a way that it guarantees fairness and safety from both public and private perspectives?

Through a series of interviews with individuals involved in the development and deployment of the platform, its underlying problematics and strengths become explicit. In the process of analysis of the interview material, three fundamental dimensions to any voting technologies emerge: Expressivity, Influence, and Integrity. An understanding of Liquid Feedback, as a vis-a-vis the three fundamental dimensions of voting technologies can provide valuable insight into the challenges faced by Liquid Feedback in the German context in particular, and by all other possible implementations of the larger notion of a Digital Democracy in general. 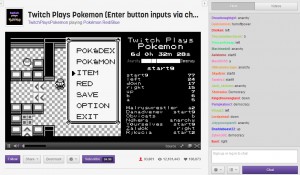 From anarchy mode to democracy mode in collective gaming: Liquid Pokemon. Nicolás’ upcoming report will have a section on it. Here is an article by The Guardian.

The Citizen Lobby. From Capacity to Influence

It is further assumed that although the private intimate realm formally elects parliamentarians (and hence governments) its influence is limited in both time and scope, since elections only take place with multi-year intervals, while politics and policy is shaped daily. Day-to-day influences over elected politicians are largely driven by the public economic realm, which in turn is influenced by owner-driven interests representing the private economic realm, channeled via the public intimate realm (media) – to a large extent privately owned and hence overlapping with the private economic realm. As these forces lobby the elected incumbents with what Habermas calls ‘generalized particularism’ – biased and typically commercially driven interests that, towards the public, are both re-formulated and re-presented as being of general concern and benefit – the economic side of our socio-economic equations is given far more attention than the social side. The global trend towards neo-liberalism is built on this priority, which – at the same time as it has created remarkable growth – also caused rapidly increasing discrepancies between ‘haves’ and ‘have-nots’, and has given rise to widespread dis-content over how our current democratic systems serves to represent their constituencies.

The Internet has for a decade or more been seen as the tool by which the private intimate realm shall be able to restore influence over elected politicians. Many initiatives with this aim have been launched, but although some gains have been made the overall impact is still modest. Some also see the emerging peer-to-peer mode of production as a promising challenge to corporate power over political life. The road from such a promise to real change however still seems long, as P2P yet needs to secure its underpinnings in general, and its financial platform in particular, before it can take on such a monumental task. It is also far from certain that the web will prove to be any more democratic than our current democratic institutions, since (which is extensively elaborated upon in this paper) the web is very quick to build new elites – and elitist practices. Although the web may promote different elites and these elites may think and work differently, as compared to parliamentarian democracies lobbied by the corporate sector, that does not mean societies by default will become more democratic.

The ‘long tail’ – or the power-law distribution – that signifies the Internet will, in fact, deny the public sphere to establish the kind of broadly supported and well-reasoned arguments that policy must be based upon. To base policy on opinions is, as Habermas pointed out already fifty years ago, insufficient and short-sighted. This paper therefore outlines a modus operandi for a Citizen Lobby, intended to balance – but not replace – the interests of the institutional lobby. This Citizen Lobby shall be mandatory and remunerated under law, i.e. not based on voluntary input, since voluntary lobbies soon become driven by vested rather than public interests. This new lobby will, through an anticipated and entailing shift in focus from election to re-election – based on the Citizen Lobby’s day-to-day monitoring – motivate elected politicians to give at least equal effort to the interests of private as to that of corporate citizens.

In July 2015, Thomas’ final report was published at meson press, a spin-off from our sister project, the Hybrid Publishing Lab:

Leif Thomas Olsen
The Citizen Lobby. From Capacity to Influence