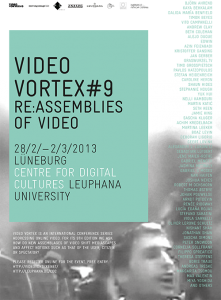 Free Video Infrastructure was a session at Video Vortex #9. Re:Assemblies of Video. VV#9 took place from 28.02. to 02.03.2013 at Leuphana University Lüneburg and was organised in cooperation with ANALOG, the regional networking event of the Incubator at Leuphana University. Most of the VV#9 video documentation is available in the VV#9 InterLace, a novel video archiving and navigation system by Robert M. Ochshorn.

Video Vortex is a travelling event, initiated by the Institute of Network Cultures in Amsterdam in 2007. See also the Video Vortex Readers II: moving images beyond YouTube (2011) and I: Responses to Youtube (2008).

Free Video Infrastructure (on 01. March 2013 from 15.00—18.00h) brought together people from some of the core free software projects for handling, displaying and distributing webvideo.

The session was organised and moderated by Agata Królikowski and Volker Grassmuck from the Public Service Media 2.0 Lab.

We are in the midst of a free video infrastructure revolution. It has its roots in the camcorder activism of the 1980s, the free protocols of the Internet and the LAMP stack (Linux, Apache, MySQL, PHP) of the Web. The first wave of free multimedia in the 1990s came in response to proprietary formats like MP3 and other MPEG standards with the Ogg container, audio and video codecs like Vorbis, Theora, Xvid, the FFmpeg framework and the VLC suite. It also brought the first video archives like OVA and the Internet Archive. In the 2000s, offline editors like Cinelerra, Blender and Kino were added to the free infrastructure, and P2P distribution on platforms like Vodo and broadcast infrastructures like P2P Next.

The current wave is driven by the transition to HTML5 with players like Kaltura and Projekktor, with new free codecs like WebM and FFmpeg’s FFV1 and Snow, and with real-time communications like WebRTC. HTML5 brings in-browser video interaction (annotating, subtitling, editing) in integrated archiving and online editing environments like Pan.do.ra and through Mozilla’s Popcorn. Wikipedia with its high requirements on freedom of re-use recently adopted a new HTML5 player. The multimedia Read-Write Society (Larry Lessig) is taking big steps forward.

The panel explores the free ecosystem of codecs, servers, video management systems, archives and online interaction environments. it brings together members of key projects in order to learn where we stand, compare notes and identify what remains to be done to assemble a full-fledged free infrastructure.