The other Side of Convergence | Grundversorgung 2.0

The other Side of Convergence

Posted on 4. March 2015 by Volker Grassmuck | Leave a comment 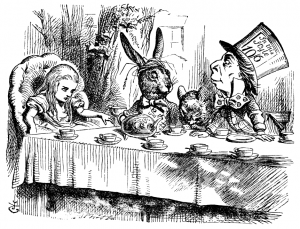 The decision for a public service youth platform on the Internet makes one feel like Alice in Wonderland (Engraving by John Tenniel 1865, source: Wikipedia).

In October 2014, the Prime Ministers of the German federal states instructed ARD and ZDF to devise an online-only youth offer – without connection to broadcast programmes, without three-step-test, without 7-day-depublication. This is nothing short of a paradigm shift in German media policy: the end of the primary role of linear broadcast and the secondary nature of online. The youth platform loses its convergent navel-cord to its technological origins in mass-media. PSM has arrived on the net. Or in the words of ARD-chief Lutz Marmor: “What is forward-looking about it is that the limitations on the Internet cease to apply.”

Previously, the PMs had asked for a tri-medial offer to which the stations had responded with a draft concept in October 2013: a TV channel, supplemented with youth-oriented radio programmes plus some Internet, supposedly a bit more than the current offers like Einslike in the ARD Mediathek and social media pages. In short, classic convergence thinking: old wine in new bottles. The BBC’s announcement in March that its tri-medial youth offer BBC3 will be turned online-only in order to save 60 of its 85 million Pounds budget, no doubt, had its influence in this change of minds. The 45 million Euros set aside for the German PSM platform are to be financed mainly by closing one of ARD’s and ZDF’s digital TV channels each.

The decision was welcomed by station heads, though with some audible teeth grinding because now they have to start from scratch, met with scepticism from media law scholars and members of broadcast oversight bodies who see technical issues and an imminent re-play of the state aid complaints in Brussels by private media, and was largely ignored or ridiculed by the target audience itself. 14-year old author Valerie Meyden in the weekly Die Zeit declared it to be superfluous, since there is already an enormous range of series, films, shows, documentary and web-videos on TV and on the Internet. “What more could a youth channel have to offer to me?”

We don’t know yet what the stations will make of it. This window of indecision is an opportunity to imagine, free of real political constraints, what a youth platform could offer and what public value on the Internet might mean.

As online-only medium it naturally needs to be envisioned and designed from within the media culture of the Internet. A core value and practice that has emerged from the digital revolution is participation and dialogue. Again Meyden: “We haven’t been asked what our generation thinks of this youth channel.” That is the first thing that needs to change. We can distinguish three levels of participation:

1. The world has become commentable. Every post can get a comment, every event a hashtag. PSM Mediatheks do allow for them but limit their reactions to deleting hate speech. Very rarely do editors reply and enter the conversation. The stations’ Social Media Guidelines create a timid attitude where before saying something wrong programme makers rather not say anything at all. They need to be able to dialogue on eye-level.

2. Audiences become actors. Even in the Interstate Broadcast Treaty we find the observation that Internet users expect communities, weblogs and platforms for exchanging content. Yet no such PSM platform offering space for actively contributing media expressions exists. The first step is to drop the defamatory term “user-generated content” implying that “authors create works”, but users only “generate content”. The benchmark for diversity in video on the net is Youtube and other open contribution sites like Vimeo, Internet Archive and increasingly Wikimedia Commons, the media archive of Wikipedia. The PSM platform thus has to offer the functionality people have come to expect from these sites plus some added, public value.

Markus Hündgen, founder of the German Webvideo Awards, has called for a public service Youtube. Otherwise, journalistic, educative and artistic content would be lacking in the increasingly important audiovisual knowledge space on the net. The new medium webvideo has exploded within a few years, as means of expression and conversation, as source of information and entertainment, as a market. Youtube is the second largest search engine after Google. Youtuber is one of the most popular desired professions among teenagers. Yet so far, ARD and ZDF are mere onlookers.

2a. In Youtube space, companies provide support and training services. Technical and content media literacy is already part of the telemedia remit in the Interstate Broadcast Treaty, including all generations and minorities, providing orientation and enabling all to partake in the information society. Citizen and Training Channels have been the third pillar of the so called dual system from its start 30 years ago. Building a bridge to the youth platform thus seems natural.

Wikipedia, like PSM, is committed to providing freely accessible, quality-controlled knowledge for all. Age-wise its active contributors strongly overlap with the target group of the youth platform. Currently, Wikipedia is undergoing its own convergence from text and image to including webvideo. Therefore it is another natural ally.

The added value of the youth platform thus could include support and training for improving not the commercial but the public service quality of contributions and the chance of having one’s work shown in the editorial programmes of the platform as well as including them in Wikipedia.

3. The third level of participation concerns structural and programming decisions. It takes us from commenting on and contributing to a service to taking ownership. The PMs have tasked the stations with devising a Youth Advisory Council. The Regional Youth Councils (Landesjungendringe), one of the societal groups who send delegates to Broadcast Councils and State Media Authorities, has welcomed the idea. In a position paper, they write that young people want to shape their environment and co-decide when they are affected, and call for space for co- and self-determination. Engagement requires ownership.

Free as in Wikipedia not as in Google

The second level of participation requires not only to be able to publish one’s own works but also to re-use, parody and remix those of others. An ARD working group has already recommended using Creative Commons licences and pointed out that granting the freedoms of modification and commercial use are required for inclusion in Wikipedia. Copyright contracts and law will be crucial for turning the platform alive and allowing re-use in education, expression and a stable archive.

Google services (search, mail, analytics, android, maps, translate, books, scholar etc.) are gratis but paid for with personal data. Public media should avoid making their users send data for individual and collective profiling to companies in countries with deficient privacy laws. This includes working towards alternatives for mobile apps on the platforms of Apple, Google or Microsoft and towards a secure mobile operating system. Also Facebook after its recent change of terms is crying for alternatives.

“A single programme for the age group from 14 to 29 doesn’t make sense,” is another of Meyden‘s complaints. Indeed, the idea that schoolchildren and young adults are united by common core interests and therefore need a thematic channel, as claimed in the tri-medial concept, does not make sense. Full programmes address the entire population with a full range of information, education, advice and entertainment. And that is what the youth platform needs to be. Young people are not a special-interest group, but the entire society up to the age of 30.

The platform has to be as multi-cultural as our society has become over the past 20 years. According to the government’s migration report, every 5th German has a foreign background, rising to 33,1% for those under 15 years of age. At the same time, xenophobia is on the rise across Europe, in Germany most recently with Pegida.

This ties into the desideratum of a European public sphere. ARD had studied several young European PSB stations and proposed content exchanges and other forms of co-operation. The EBU that in its Vision 2020 also urges PSM to become more relevant to younger audiences is another natural ally.

When PSM enters the Internet, it extends its responsibility to the entire ecosystem. The networked public sphere provides an immeasurable diversity of voices of various directions, interests and degrees of radicalisation. In this plethora, only media mandated, payed for and controlled by the citizens have the chance of researching and reporting in the public interest. In addition to being a trustworthy source of information and giving advice on the dangers on the net and how to protect oneself, the remit also extends to the digital framework conditions themselves.

Media regulators have already spoken out in favour of net neutrality, search neutrality, privacy and data protection. PSM have to set examples by not tracking their users, avoiding monopoly technologies and supporting alternatives from civil society and start-ups like Threema, YaCy, Faroo, MediathekView and FireChat. When the broadcast fee collected from every household pays for an Internet platform that youngsters in the countryside lack the bandwidth to perceive then broadband roll-out and free networks become an essential goal for PSM. Wherever laws and regulations on these and other issues like copyright are being reformed they have to put their weight on the scale for the better. If the open Internet is turned into a splinternet we all lose.

The project of the youth platform is a big step for broadcasters and a huge chance for Internet culture if it gets the opportunity to embrace it. Its success depends on the approach taken. Will it be top-down emanating from the hierarchs of the public corporations or bottom-up from the young and net-savvy staff at the stations and from the target group itself?